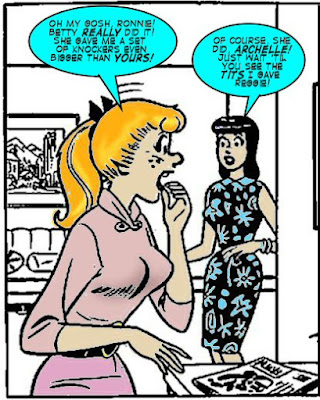 Posted by Pretty Sissy Dani at 9:12 AM No comments: 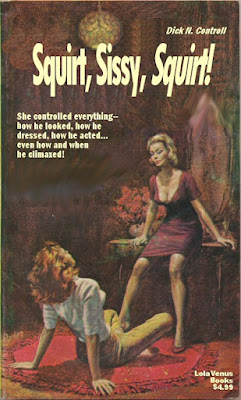 Posted by Pretty Sissy Dani at 9:47 AM No comments: 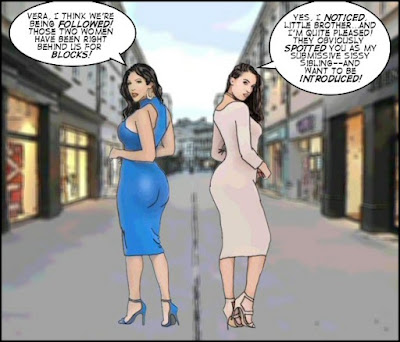 Posted by Pretty Sissy Dani at 10:17 AM No comments: 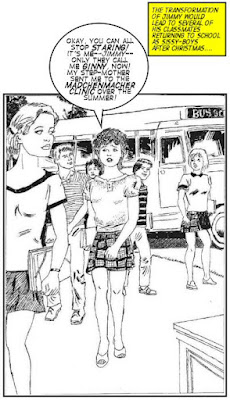 Posted by Pretty Sissy Dani at 9:13 AM No comments: 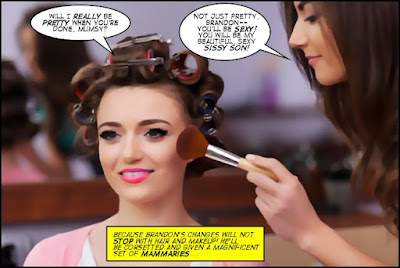 Posted by Pretty Sissy Dani at 8:36 AM No comments:

If you haven't already read the trance-script of my last hypno-session with Goddess Lola, here's a relevant bit:

Aphrodite and Venus in modern form

Oh, so much more

And your task shall be

to research all My former incarnations

And choose all the best aspects of each

So that my next form

shall be even greater

So, here's the first report on that research: 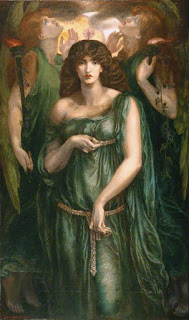 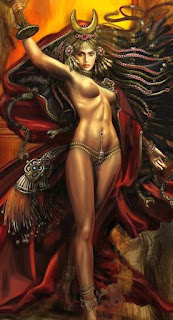 Astarte is the Hellenized form of the Ancient Near Eastern goddess Ashtart or Athtart  (Northwest Semitic), a deity closely related to Ishtar (East Semitic), worshipped from the Bronze Age through classical antiquity. The name is particularly associated with her worship in the ancient Levant among the Canaanites and Phoenicians, though she was originally associated with Amorite cities like Ugarit and Emar, as well as Mari and Ebla. She was also celebrated in Egypt, especially during the reign of the Ramessides, following the importation of foreign cults there. Phoenicians introduced her cult in their colonies on the Iberian Peninsula. 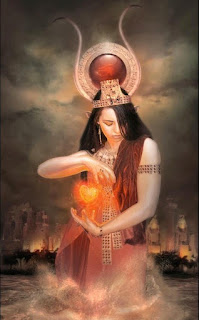 Hathor was called "mistress of love", as an extension of her sexual aspect. In the series of love poems from Papyrus Chester Beatty I, from the Twentieth Dynasty (c. 1189–1077 BC), men and women ask Hathor to bring their lovers to them: "I prayed to her [Hathor] and she heard my prayer. She destined my mistress [loved one] for me. And she came of her own free will to see me." 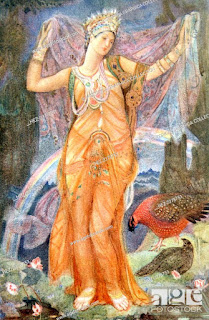 Individuals who went against the traditional gender binary were heavily involved in the cult of Inanna/Ishtar. During Sumerian times, a set of priests known as gala worked in Inanna's temples, where they performed elegies and lamentations. Men who became gala sometimes adopted female names and their songs were composed in the Sumerian eme-sal dialect, which, in literary texts, is normally reserved for the speech of female characters. Some Sumerian proverbs seem to suggest that gala had a reputation for engaging in anal sex with men. During the Akkadian Period, kurgarr? and assinnu were servants of Ishtar who dressed in female clothing and performed war dances in Ishtar's temples. Several Akkadian proverbs seem to suggest that they may have also had homosexual proclivities. Gwendolyn Leick, an anthropologist known for her writings on Mesopotamia, has compared these individuals to the contemporary Indian hijra. In one Akkadian hymn, Ishtar is described as transforming men into women.

Although she was worshipped as the goddess of love, Inanna was not the goddess of marriage, nor was she ever viewed as a mother goddess. Andrew R. George goes as far as stating that "According to all mythology, Ištar was not(...) temperamentally disposed" towards such functions. As noted by Joan Goodnick Westenholz, it has even been proposed that Inanna was significant specifically because she was not a mother goddess. As a love goddess, she was commonly invoked in incantations. 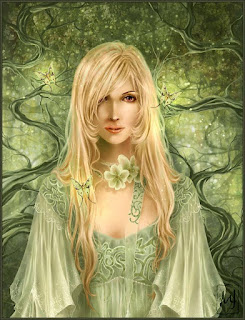 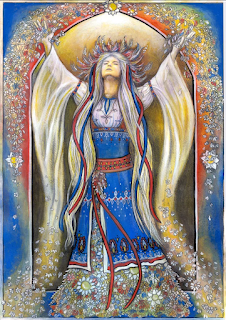 Lada is the Slavic Goddess of spring, love, and beauty. She was worshipped throughout Russia, Poland, and other areas of Eastern Europe. She is usually depicted as a young woman with long blonde hair. She carries wild roses, and is also known as the ‘Lady of the Flowers’. As Goddess of spring, Lada is associated with love and fertility in both humans and animals. She is said to return from the underworld every year at the Vernal Equinox, bringing the spring with Her.

Posted by Pretty Sissy Dani at 8:49 AM No comments:

The Temple of Pleasure 3

Abbess Miranda escorted Dani to the Goddess’s chamber, pressed the buzzer and waited for the door to open. When it did, the mellifluous voice of the Goddess called out from within. “Enter, Dani!” Then she continued, “Abbess, you may return to your other duties. I will summon you if needed.” The door closed as Dani went in.

Goddess Lola Venus was lounging on a couch on the platform at the far end of the chamber. She smiled as Dani came forward, still in her trance. “I see Dr. Madchenmacher and Marguerite have outdone themselves—but you gave them an excellent base on which to work, Dani,” she said. “Come stand up here before me, it is time for you to receive further pleasure.” Dani obeyed. “In moments, I will awaken you from trance, but first some additional instruction and indoctrination.”

The Goddess lay back on the couch, her legs spread lasciviously. She raised the hem of her gown, revealing her naked sex, and then fingered herself there. She beckoned to Dani with her glistening wet fingers. “Sniff, Dani, smell my scent…” Dani came forward and leaned over the Goddess’s form, sniffing at her hand. “That is the most intoxicating perfume you have ever encountered,” the Goddess told her. “It arouses you, makes your sissy-cock stiff.”

Now, the Goddess slipped her still wet and sticky fingers between Dani’s lips. “Lick them clean, Dani. Taste my nectar. There is nothing sweeter, more appetizing, more appealing than the taste of my pussy juices.” She gently guided Dani’s  head to her naked crotch. “Now, taste it at the source—so much more potent, more erotically intense, when it is taken directly from the fount.” Dani obeyed, burying her face in the Goddess’s sex, her tongue lapping up those delicious secretions. As she did, the Goddess moaned with pleasure and Dani’s sissy-cock got harder with every sound.

“No, I cannot come unless you permit it,” Dani agreed.

“But if I tell you to come, you will instantly do so, like this: Squirt, Dani, squirt!” And Dani’s sissy-cock erupted with a massive flood of cream, pouring out. “Good girl!” the Goddess said, “and each time I tell you are a good girl, a new thrill of pleasure runs through you!”

“And every time you say ‘yes, Goddess,’ your devotion to me increases ten-fold, doesn’t it?”

“Yes, Goddess,” Dani replied again and felt his love and addiction to the Goddess’s presence grow even stronger.

The Goddess again rang for Abbess Miranda. “I want you to summon all the worshipers to the main chapel at sunset. I have a major pronouncement to make.”

“Yes, Goddess, of course,” the Abbess replied. “Do you require anything else?”

“Take Dani to her new chamber adjacent to mine. Have Marguerite prepare her for a presentation to the Temple,” the Goddess instructed. “And then bring her to my sacristy in the chapel at 15 minutes before sunset.”

“Yes, Goddess,” the Abbess answered, a bit baffled about what was being planned. But she held out her hand and said, “Come with me, Dani.”

In Dani’s new chamber, attendants prepared a scented bath for Dani and bathed her. They massaged her with skin softeners. Marguerite arrived and did her hair and makeup. Dani was laced into a tight pink corset, and clothed in pink lingerie. She was zipped into a new pink satin column gown, clinging to every curve, but with little bare skin showing. It was tight around her thighs and ankles, resulting in a wiggling, mincing stride on the six-inch heels of her pink sandals.

Outside a gong sounded. “That is the first call to the sunset audience,” the Abbess said. “Dani, it is time.”

They entered the chapel sacristy, which was empty except for Dani and the Abbess. Moments later, as the chapel filled with the glow of the sunset, the door to the chapel opened and the Abbess led Dani out. Now, she saw Her Goddess, in a gleaming white satin gown much like her own pink one. The Goddess held out her hands and Dani went forward to take them in her own. Goddess Lola turned to the assembled worshippers and said, “I present to you the Divine Dani, who is to be my personal sexual aide. Her favors are restricted to me. And now, I mark her as my submissive lover.”

She pulled Dani to her and kissed her passionately. And with this ultimate touch, Dani’s attachment to the Goddess became permanent. She sank to her knees and stared with glowing eyes into the face of the woman she worshiped. “Goddess Lola, I am yours.”

Would you like to see more of the Temple of Pleasure? Tell me in the comments, or e-mail me at prettysissydani@gmail.com

Posted by Pretty Sissy Dani at 8:41 AM No comments: 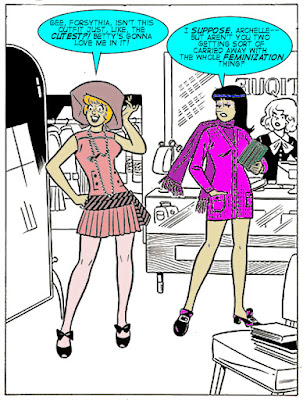 I guess Forsythia (Jughead) isn't aware of her own changes?
Posted by Pretty Sissy Dani at 9:17 AM No comments: 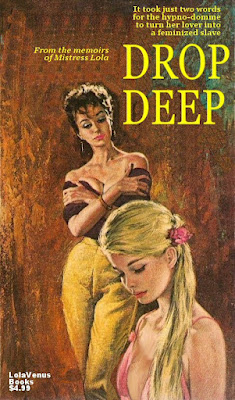 Posted by Pretty Sissy Dani at 9:38 AM No comments:

Back to School Prep 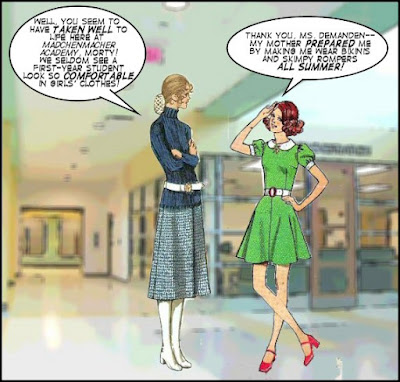 Posted by Pretty Sissy Dani at 10:03 AM No comments: