When I began putting my stories onto a website, I realized that pure text looked dull and was hard to read. I started to explore adding pictures. At first, I just did some mild editing to existing photographs culled from the web and magazines...but, as time went by, I developed the ability to do more.

The first attempts were crude--I still didn't have a handle on what the image editing programs could do--but things improved steadily. Unlike many, I've never used Photoshop...I find it way too complicated. Instead, I use a combination of two other programs--Canon Creative and Paint Shop Pro. Canon's layering system is much easier to work with (for me) than either Photoshop or PSP, while PSP has a greater range of artistic and lighting effects to work with.

Anyway, I soon got the hang of taking an image I liked and altering it to fit the story I'd written and my personal tastes. Sometimes, a picture would be the inspiration for a story. The earliest attempts were quite simple--in this one, I put the face I wanted on a figure of, as I recall, Christina Aguilera, and then altering the size of her boobs and waist. In time, though, I learned I could do more. For one thing, I could put in the faces of real people, starting with my own. So, I redid the images for the seminal "Pretty Sissy Dani" story, remaking all the looks of the title character by using slightly altered versions of the portrait shots I showed you earlier. This is an example.

People started asking me to do stories especially for them..."customized fantasies," if you will. Many sent pictures of themselves for use in those tales. I learned how to alter a male face to a female one...here's an early attempt.

Later, I discovered iVillage.com, which has a "virtual makeover" program, where you can upload a picture of yourself (or anyone else) and try out various cosmetic and hairstyle looks. I've used that, as well, often in combination with my own alterations, to create "looks" for some of the people in my stories. Here's a shot of "Lori", a frequent story requester, done with a combo of the virtual makeover and my own work.

So, I'd finally found some outlets for my need to dress and a way to use my particular fantasies.

About this time, I met the girl who would become my wife. Although she discovered my "hobby" fairly early on in our relationship, she was never comfortable with it. We tried some things at times--I slept with her wearing a nightgown a few times--but it never turned her on and eventually she became thoroughly turned off by it all. But I love her and I decided I would simply keep my fantasy life a fantasy. 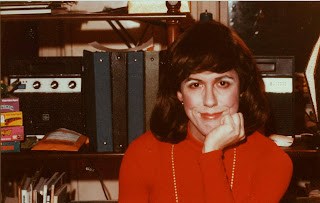 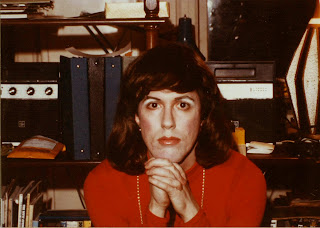 In the meantime, I took a job in upstate New York and my friendship with Bobbi and Steve ended because of that. All chances to dress came to a close...and I haven't dressed in 25 years as a result.

Here are the last two pictures I have of myself in female mode, both taken by me about two months before I moved north.

The upstate job only lasted about nine months and my wife and I were soon back in New York City. Our first child was born about four years later. I got back in touch with Steve, quite by accident, around that time. We talked about our shared interest and all, but with Bobbi out of the picture, dressing seemed to be out for both of us.

More and more of my "other life" began to be tied to computers. I participated in discussion groups on Compuserve (remember that?), Usenet, and private boards. I contributed stories to all of them. Finally, about 15 years ago, I got a web-capable computer and as the web exploded, I started doing more and more work there, eventually creating my first website on Geocities. It eventually moved to a half-dozen other providers over the years, constantly expanding, with more stories, essays and art (more about that later). Finally, when my last webhost disappeared, I decided to put the site on extended hiatus (and, like in TV, that phrase really means "cancellation"). I was "written out" by that point, anyway.

More soon.
Posted by Pretty Sissy Dani at 8:47 AM No comments:

In preparation for the first get-together, I bought some makeup and the wig I'd worn for the makeover at Lee's. I packed the lingerie and shoes I had and headed to Bobbi's place.

Bobbi was clearly experienced at dressing, including in public, while I was nearly a novice. I borrowed some stuff he and Steve had and Steve took some photos. The ones here are the only ones I have left from that time (I don't think they're from our first session, actually, since the auburn pageboy I'm wearing is the wig I bought a month later.)

During this same period, I learned a little more about the "scene" and discovered the existence of professional dominatrices, women who specialized in humiliation and punishing men who got off on it. Many of them included forced cross-dressing as part of their services. I splurged and made an appointment with "Belle de Jour". At that first encounter, Belle dressed me in a maid's outfit, set me to work washing her undies, and then masturbated me to a climax. I was excited, but more by the whole secretness of the thing than anything else.

I also learned that Belle hosted a weekly "show" displaying her services and invited members of the audience to participate at the end. I began attending those shows about once a month, usually wearing my lingerie under my male clothes. When she invited the audience up, I would volunteer for a spanking, lowering my pants to reveal my panties, garter belt and stockings.

A few months later, Bobbi and Steve told me about a "club" they would be going to in Greenwich Village that had a TV night. (It was actually a local bar that rented space to the organizers.) Bobbi would be attending in drag and they asked if I wanted to come along. Having said "yes", I realized I'd need clothes...and Bobbi agreed to go on a shopping trip with me.

I'd done some surreptitious shopping outside of Lee's...learning I could buy stockings at Macy's--even talking to a clerk about them--without anyone raising an eyebrow, and getting shoes at another store's clearance basement. But I had no idea how to guess my sizes in blouses, skirts, or dresses, and trying them on in the store was out of the question. With Bobbi's help, I found a blouse, a knee-length denim skirt, and a dress. I decided to wear the skirt and blouse to the club, along with a pair of boots I borrowed from Bobbi.

I had one other surprise for Bobbi and Steve that night. I splurged again and bought a real corset at Lee's. I had actual curves! (I think I'm wearing the corset in these pix.) By then I had the auburn wig, too.

Still more to come on this phase of my life....
Posted by Pretty Sissy Dani at 3:48 PM No comments: