[This story is somewhat different from most of my others...it's a tale of a femme hypnotist making a boy into a suitable partner for a male...] 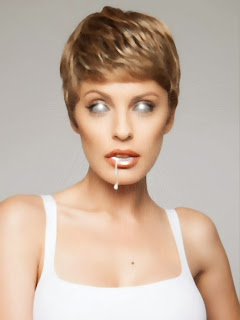 Jimmy sat at the table, his glazed eyes staring unseeing at the candle's flame, a line of cock-cream trickling over his lips as it dribbled from his mouth.

"Well, dear," said Ms. Demanden, seated across from him. "Now, you realize that it will take more than a dress and a little makeup to let you pass as a girl in this club. You have marked yourself as just a sissy...a nancy-boy...a pansy...and I have used my skills to make you act as what you seem to be."

Inside his trance, Jimmy thought back to when he had entered the club, known as the place for kinky eroticists in town. He thought of himself as a male lesbian...a guy who wanted to wear dresses and have boy-girl-on-girl sex. He drew stares and glares as he came in; he knew he didn't look completely feminine, but he thought that would not matter in this crowd.

He was wrong. Putting on the right appearance here was crucial--if you were going to be a lesbian (even a male one), you had better look the part. So when he came on to and flirted with the most attractive lipstick lesbian in the place, he was in trouble.

"This will teach him...make him the willing plaything of the boys who like boy-girls!" she thought. Playing along with him, she guided him to the table and began her secret induction. "You can't call yourself Jimmy, sweetheart," she began. "You're much too pretty...how about Ginny, instead?"

"Now, look at the candle, sweetie...let it relax you. You'll never be able to be girlish if you're so tense...just let the flame surround you...sink deep into it...sink deep...sink deeper...."

The combination of alcohol and her words soon had him in a deep trance. She directed his attention to one of the handsomer doms at the bar. "See that fellow in leather, Ginny? He seems quite taken with you, hasn't taken his eyes off you since you walked in." It was true--the dom, called the Nancy-Master by his peers, had a definite thing for androgynous boys and had spotted Jimmy immediately.

Vera called him over. "Ginny here has been asking about you," she lied. "She wondered if you'd ever had a good cock-sucking from a pretty little thing like her." Vera smoothed her hand over the leather stretched tight on the dom's crotch, drawing Jimmy's attention to it. "Isn't this a beautiful sight, Ginny?" she purred. "Wouldn't you like to see it closer?"

Entranced, Jimmy nodded. The Nancy-Master took him by the hand and led him to one of the back rooms. Thirty minutes later they returned. "He's very good," the dom reported. "Do you mind if I share him around?"

"Not at all...have fun, dears...." Vera watched as Jimmy, still deep in trance, was introduced to a group of men, all of whom admired his soft red lips.

That was two hours ago. Now Jimmy had returned to her. "You had a good time, didn't you? You really enjoy the taste and feel of cock-cream, don't you? You're not a male lesbian at all, are you? You're a sissy cock lover...and you will be back here every night for another taste.

Jimmy...no, she was Ginny now...awoke and stood up, walking in an exaggerated mince to the Nancy-Master's group. She smiled and kissed her first lover sweetly, while caressing his crotch again. She was ready for another mouthful.

[Please participate in the survey to the right.]
Posted by Pretty Sissy Dani at 10:52 AM