A short time later, Liz led Morgan though the mall to the luxury cosmetics store. “Are we buying makeup here?” he asked.

“Eventually,” she responded. She walked up to one of the cosmeticians offering makeovers. “Are you accepting walk-ups?”

“Why, sure honey,” the woman answered. “Though you don’t look like you need one.”

“Thank you, but it’s not for me—it’s for my friend here,” Liz said and pushed Morgan forward.

“No,” Liz replied. “But my boyfriend is a crossdresser and he needs some help at looking his feminine best.” She guided Morgan to the stool and helped him sit. Then she looked him in the eyes and said, “Girly girly girly….” His eyelids fluttered and he dropped into trance. “Now, Morgan, I want you to watch everything this nice lady…” she checked the namebadge…”Tiffany does and remember it. You’ll have to do this for yourself from now on.” Liz spoke again to the cosmetician. “I promise you we will purchase at least one of everything you use on him.” 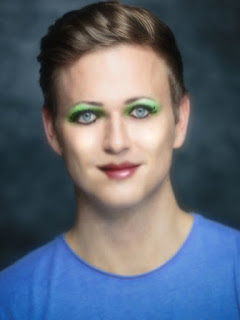 It took over an hour for Tiffany to accomplish the effect she wanted. Morgan’s face was remade into a truly feminine one—thanks to eyebrow sculpting, contouring and careful application of color. While that was happening, Liz had a conversation with the store manager. “Can you recommend a place here in the mall to get my friend a nice wig?”

“Certainly, miss,” the manager replied. “We often send our customers to Hair Apparent. I’m afraid it’s all the way at the other end of the mall, though.”

“Not a problem; I’m sure my friend won’t mind showing off the wonderful makeover your Tiffany has given…her,” Liz responded, smiling. She rejoined Morgan who was still deep in trance. “Morning Morgan!” And with that, Morgan awakened and saw his new look in the mirror.

“Oh! Oooooohhhhhhh,” he moaned, as the sight of his thoroughly feminized face brought him to full arousal. That was followed by a smile of delight.

“Now, do you remember everything Tiffany did to achieve this new you?” Liz asked him.

“Yes, I do,” Morgan answered. “And I’m quite sure I could duplicate it.”

“Good girl!” Liz said, grabbing his arm. “Now, come along—we have another stop to make and it’s at the far end of the mall!”

“You mean….I’ll have to walk all that way, in my dress and heels and with my new look?” Morgan asked. When Liz shook her head to say yes, he grinned. “Then what are we waiting for?”

They strolled together through the mall, with Morgan getting more than a few intrigued looks from passersby. After all, he appeared to be a tall, flat-chested woman in full makeup, but with a male hairstyle. More than one shopper paused and whispered something to a companion and once Morgan distinctly heard the word “sissy”. At that, he confidently walked up to the pair and said, in a decidedly masculine tone: “Yes, I’m a sissy, that’s my girlfriend who is feminizing me…and I’m perfectly happy with it.”

Without further encounters, they arrived at Hair Apparent, where Morgan was awed by the many styles and colors available. “Honey, I want you to be completely surprised by your final look, so—girly girly girly.” And Morgan returned to his trance state, while Liz spoke to the sales person. “As you can no doubt tell, my friend here is a male being feminized by me. I’d like to try out a few styles on him—nothing outlandish, just something close to his own color and complementary to his face.”

“Of course, Miss,” the attendant said. “Have him take a seat and I’ll bring out a few selections.” A few moments later, she returned with a half-dozen wigs on stands. “I think a medium brown shade is the best match to his own hair and to his natural coloring,” she said, “and I would recommend a chin-length cut for his face shape.”

“Well, let me see them on him and we’ll make a choice…or, rather, I will,” Liz said, laughing. Of the six styles, one was rejected as too dark, one as too light, one as too long, and one as too short and boyish. That left two that Liz couldn’t decide between. “I tell you what,” she said. “Why don’t I allow Morgan to make the final choice?” She looked him in the eye and said, “Morning Morgan.”

His eyes fluttered as he came out of trance. “Liz, where am I and what are we doing?” he asked. 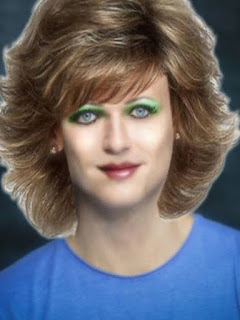 “We’re in the wig store, choosing a style and color for you,” she replied. “I’ve narrowed it to these two…but I can’t decide which I like more, so I’m leaving it to you.” She nodded to the salesperson. “Try the first one and let him see it.” Just moments later, Morgan saw himself for the first time in full makeup and with a feminine hairstyle.

He smiled. “I look very pretty and very girlish,” he said. “I like this one.” 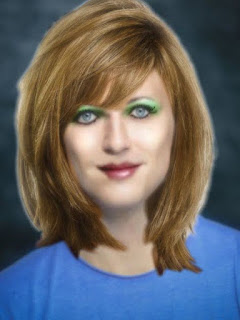 “I thought you would,” Liz agreed. “But do you like it more than the other one.” And the salesperson switched out the wigs and let Morgan see the result.

“Then we’ll get them both; if nothing else, it will give you some options for when your hair is long enough for us to get it done at a salon,” Liz said.

A salon? Morgan thought…and his sissy-cock twitched at the thought. I wonder if that means curlers and a perm. I hope so!

With Morgan now looking like a proper lady, Liz led the way to the car and then home. She went directly to Morgan’s bedroom and began going through the remainder of his feminine wardrobe. She pulled dresses, blouses and skirts out and made two piles. “This will work…this won’t…yes…no…definitely no…oh, yes, beautiful!” she said as she went through the clothing. Finally, she ended up with a pile of rejects considerably larger than the pile of “keepers”. 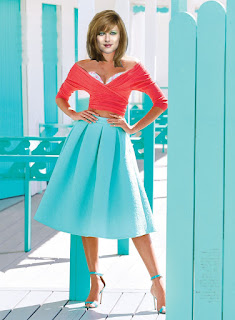 “Really, Morgan,” she said. “Did you really think some of these things were attractive on you? Or befitting a submissive sissy? Come here, let’s get you into a couple of the ones I’ve chosen and you can see what I mean.” The first choice was a pink crop-top over an aquamarine a-line skirt. “Do you see how this simply floats?” she asked him. “This is how a sissy dresses. In the most feminine of styles.” 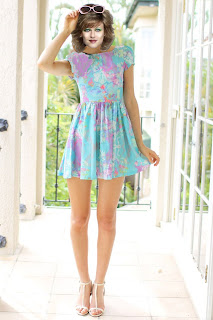 The second choice was even more girlish: a floral print frock in pastels, with cap sleeves and a skirt that ended well above mid-thigh. “I see you like this look,” Liz said, as she watched a smile grow on his face. “Just a touch little girly, and a bit sexy as well.” Morgan blushed as he realized how much she had accurately read his reaction.

She watched him move about the room and came to a decision. “Morgan—girly girly girly…,” she said and watched as he sank into trance. “I can’t keep calling you Morgan—not when you look so utterly femme! From now on, your name is….let me see…oh, yes, Margo! Do you like that?”

The newly christened sissy was smiled. “Yes, Liz, I like that very much! Margo…Margo….Margo….”

“Good girl!” Liz exclaimed. “Tomorrow we’ll go to the jewelers and get you a locket and an ID bracelet…and maybe even a nice ankle bracelet…with your new name on them!” She lay back on the bed. “Now, come here, I think I deserve a reward for helping you become the sissy you were always meant to be.” She spread her legs. “Time for your first lesson in really pleasing a woman!”

Posted by Pretty Sissy Dani at 8:41 AM