Cross-D-R: The Sissy Ranch, part one

SPEND A WEEK AS THE GIRL YOU WANT TO BE!

Welcome to the Cross-D-R Ranch, where men can be women all the time. Located in an isolated part of the American West, you can be the wife, sister, lover, sissy, bimbo, or whatever sort of woman you desire!

FOR MORE INFORMATION, GO TO WWW.SISSYRANCH.COM

Richard was fascinated by the ad. He sat on his bed in his pretty pink nightie, staring at it on his laptop screen. Pictures showed cross-dressed men..and some real women…in Western gear, enjoying horseback rides and square dances. It was clear they were all having a great time. There were even shots of people clearly having more intimate encounters—though it was difficult to tell at the time if either of the participants was a real woman or not.

He clicked further and found the information about services and length of stay. Although a week was the minimum, it was also possible to spend as much as an entire season at Cross-D-R. The prices were reasonable…and Richard made a reservation to begin in a month.

Once his payment was accepted, Richard received this e-mail:

Thank you for your reservation; we look forward to seeing you at the Cross-D-R Ranch.

On the morning of your trip, you will be picked up by a limousine, which will drive you to the airport to meet the chartered jet that will fly you to the landing field on our property. Pack only what you will need for the flight out and return as we will provide all other clothing for your stay. On the attached form, please list your sizes and measurements.

If you wish, you may fly in girl mode, although many of our guests prefer to reserve their feminization until they are in the skilled hands of our experts. You should, however, choose a feminine name—first and last—before boarding the flight. You can list that on the form as well.

You have chosen the two-week package, but you may extend that to whatever length you wish once you are here. Many guests do.

Richard contemplated what he would like to be called if he were a girl. Rikki? Rachel? Rochelle? Well, maybe not something related to his male name. Something a little sexy and daring—how about Honeypie? Yes! That was it—he put Honeypie on the form and then proceeded to fill in his sizes and measurements. He hit send and now his reservation was really complete.

A month later, a small tote bag at his side, he waited on his porch for his ride. A long black town car pulled up and a gorgeous woman got out. She was tall and voluptuous and clad in a skin-tight leather suit with a chauffeur’s cap. “Miss Honeypie?” she asked. When Richard nodded, she held open the passenger door and he got in.

She drove to the private side of the airport, right up to the side of a small jet with the logo of Cross-D-R Ranch on the side. Richard went to grab his bag, but the chauffeur took it instead. She gestured to the steps of the plane and he climbed up into the cabin. And equally beautiful woman met him at the top, dressed in a pastel pink air attendant’s uniform—tightly fitted, low-cut, mini-skirted, with six-inch heels. She escorted him to a seat, offered him a drink, and then informed the pilot they were ready.

The windows of the plane were darkened, so Richard had no idea of the terrain they flew over. “I guess they really want to keep the location of the ranch a secret,” he realized. After a four-hour flight, the plane began to descend over some low hills and then landed on a private air strip. The only buildings—or sign of civilization, even—were the ranch buildings at the edge of the strip and the sign that said “Welcome to Cross-D-R Ranch! No males allowed!” 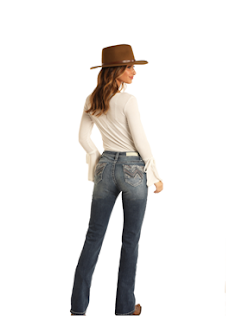 A very attractive woman in cowboy gear approached and said, “Miss Honeypie?” When Richard acknowledged her, she said, “I’m Carla. It’s my job to prepare all our guests to enter the ranch. Follow me, please.” Richard followed her, enjoying the sensuous flow of her ass and hips in the tight jeans. She led him into a small room with an attached bathroom. “Remove all your male attire and place it in the hamper,” she instructed. “Then take a shower with this special soap.” She handed him a tube. “I’ll be waiting when you’re done.”

Richard took the tube of soap and followed directions. As the water cascaded over his body, he saw that every strand of hair below his face washed away with it, including his chest, his legs, and even his armpits and pubic hair. He stepped out of the shower pink and smooth and very girlish.

< Carla applauded on his reappearance. “Very pretty, Honeypie!” she exclaimed. “Now, come sit here for the next step.” He sat in a salon chair as Carla produced another tube, squeezed some into her hands and applied it to his chin, cheeks and upper lip. She then took a wet towel and gently wiped. When she was done, Richard ran his hands over his face—it was smoother than he ever could have imagined. “That will last until your two-week stay with us is over…or, if you choose to extend your stay, we can do it again.”

Carla beckoned again. “Follow me…” She led him to a room filled with all manner of feminine clothes, all in Western styles. She started with a corset, reshaping his waist and hips. Then came a bra, well-stuffed to the dimensions Richard had outlined in his application form—35-C. Stockings were next, sheer ones that clipped to the garter straps of his corset. Petticoats followed—layers and layers of them—and then a full-skirted red dress with a scoop neck. The last touch was a pair of t-strap pumps in white.

Richard looked down at his new attire in wonder. “There’s a square dance tonight to welcome all you newcomers, Honeypie,” Carla explained. “I wanted you to be ready for it.” She motioned for him to follow again. “This last stage in your orientation may seem a bit strange, but we have discovered it’s the best way to get you acclimated.

” She led him into a room with a single chair facing a large video screen. “Have a seat,” she said and as Richard sat, a series of bindings activated, holding him firmly to the chair. “It’s very important that you pay strict attention to the screen,” Carla explained. Still, Richard struggled until it was clear the bonds were too tight and too strong for him to escape. Carla left the room and it went dark. Richard was sure he smelled a sweet, almost intoxicating scent fill the space. The video screen lit up and a beautiful middle-aged woman appeared.

“Welcome,” she said. “I am Vera Demanden, owner and manager of the ranch. You are now undergoing the most important part of our orientation. When you are released from this room, you will think, move, and speak like a convincing woman…and you will be completely submissive to anyone who wears a badge indicating they are part of the ranch staff.

“You see, we know that all the men who apply to come here are, at heart, sissies—men who wish to be subjected to feminization and become lovers, servants, even slaves to dominant women like us. Already, you should feel your masculine will fading away, to be replaced by the intense desire to be a lovely piece of feminine charm on the arm of your mistress.

“The longer you remain with us, the deeper this desire will grow. Some sissies decide never to leave, and become part of our more menial staff—the maids and waitresses. Some fall in love with one of the mistresses here and become a permanent part of her household.

“For now, just sit and absorb the lessons about the new life you are about to embark upon….” 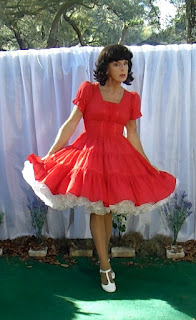 Richard felt his mind go blank and then be filled with the information coming from the screen. Oddly, he felt happy and content as it happened, no longer concerned by the strange turn his visit had taken. After a time—he had no idea how long it was—he realized the bonds were gone and his mind was different. “How are you feeling, Honeypie?”

At the sound of Carla’s voice, Honeypie (yes, that’s who I am, he realized) smiled and turned to her. “I am happy and ready to serve, Mistress Carla,” he answered.

Carla wheeled a mirror before him. “While you were being…educated…we took the opportunity to complete your transformation. Stand and see the new you.” Honeypie stood and stared. His face had been thoroughly feminized with cosmetics and he wore a dark curly wig. He was still in the square dance outfit and he twisted and twirled to feel the petticoats and skirts rustle against his nylon-clad thighs.

“Yes, beautiful, sexy, submissive….all the things a sissy at Cross-D-R Ranch should and must be,” Carla agreed. “The dance is just beginning…come join your sister sissies and the mistresses for a night of fun!”

Honeypie followed Carla to the barn where the square dance was in full swing. She introduced Honeypie to one of the other dancers. “Mistress Astra, may I introduce Honeypie? She has just completed her orientation.” As if he knew exactly what to do, Honeypie did a deep curtsey. Astra extended her hand for a kiss. “It’s always nice to meet one of the new girls,” she said, “especially one as lovely as this. Tell me, Honeypie, have you square danced before?”

“The perfect answer!” Astra said, beaming. She took him by the arm and led him to the floor. “Just follow the caller’s instructions and I’ll guide you if you don’t understand.” In a short time, Honeypie had the hang of it and was smiling and laughing with the others. But then came an unusual call:

Honeypie watched half the dancers sink to their knees, with their heads buried under the voluminous skirts of their counterparts. Soon the dancers left standing were moaning sensuously. “Well, Honeypie, don’t you know what to do?” Astra asked. Honeypie knelt and placed his head under her skirts and pettis, as she placed her hands on the back of his head and pressed him to her sex. He breathed deeply, recognizing the scent as the one that had mesmerized him during orientation….and he knew immediately what his role in this was to be.

He began to lick and suck her pussy and soon Astra was moaning along with all the other dominants. As she reached orgasm, Honeypie felt his own climax arrive and he filled his panties with the thick sticky stuff. A word came to his mnd: “cock-cream”. And with that, he reached into his panties, scooped up the ejaculate and brought it to his own lips. He looked around…every other sissy guest was doing the same.

TO BE CONTINUED
Posted by Pretty Sissy Dani at 9:30 AM