Have they lost interest in me? he thought. Had their fun, introducing me to their kinky little world, and now they're done? Discouraged, he packed his suitcase, checked out of the hotel and headed for the airport. 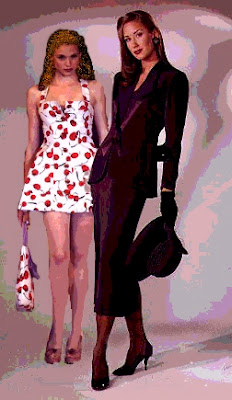 Standing in line at the taxi stand, a familiar voice spoke from behind him: "Crowning glory." All thought left Alex's head as he fell once again under the spell of his Mistress Jessica. "Turn around," she ordered.

He did as she requested, and there she stood, looking business-like yet still dominant in a black suit with a pencil-thin skirt, gloves, pumps with five-inch heels and holding an elegant hat. Amber stood just behind her, a marked contrast to the all-business Jessica, wearing a teeny little sundress with a red flower print and holding a handbag to match. She balanced on platform sandals with six-inch heels. The sight of them, even in the midst of his trance, caused Alex's cock to rise.

Jessica noticed the bulge in his pants and brushed it with the brim of her hat. "I thought anticipation and a little disappointment would be good for you," she laughed. "Now, come, my car is already waiting to take us all to the airport."

Obediently (as if he had any other choice!), Alex followed them to the limousine. The trip to the airport was silent. Not another word was spoken until they got out of the limo. "Amber--go pick up all our tickets. Alice, come with me to the executive lounge!" At the entrance to that VIP enclave, Jessica showed her pass and escorted the mesmerized Alex to the changing rooms available for weary first-class passengers. In a few moments, Amber joined them with an overnight bag.

"Oh, good, here's your new look, Alice!" Jessica exclaimed. She opened the bag and took out a selection of feminine articles-a push-up bra, thong panties, crotchless pantihose, and more. Quickly, she ordered Alex to strip and began helping him into these sexy dainties. They were followed by a denim skirt with a white lace trim, a denim halter top exposing bare midriff and a pair of red shoes with ankle straps and six-inch heels.

"Sit," she ordered and began to transform Alex's male features into the sensuous face of Alice. The usual eyebrow plucking, eyeshadow and liner, mascara, blush and lipstick followed…but this time, something new was added. "Open your eyes wide, Alice," Jessica said, and she popped a pair of contact lenses into his eyes, turning their usual light brown to an intriguing, eye-catching green.

"And now the final touch!" She turned Alice to face the mirror, so she could get the full effect. From out of the always-present wig box came a cascade of auburn curls. She settled it on her hypnotized slave's head and carefully secured it. The red-brown waves tumbled over her shoulders and across her ersatz breasts, framing her newly green eyes perfectly. 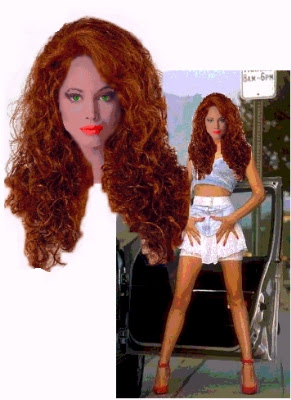 With the addition of the wig and the snap of Jessica's fingers, a flood of instructions rushed into Alice's mind: "Now you are Alice the cocktease. You delight in offering men all the pleasures of your body, but always holding off the one thing they really want. The sight of a man's bulging crotch arouses you--the bigger, the more obvious, the longer you can keep him that way, the better."

Alice stood and strutted about the changing room. "I love this, Mistress Jessica! Is this feeling of power something all women have?"

"No-only the most beautiful, and those who are aware of their sexuality and are unafraid to use it to control others," Jessica replied. "Amber feels it only occasionally, when I permit her to humiliate herself by leading on some man. You will feel it only when I permit it, as well." She looked at her watch. "Now, hurry! We have a plane to catch!"

We? thought Alex, deep inside Alice's enticing form. We're traveling together? You mean, after all this time, Mistress Jessica and I have been living in the same city?

The three beauties strolled down the airport concourse, Alice thrilling at the lustful stairs she got from nearly every male. She flirted shamelessly, licking her lips, sucking her finger, shaking her hips more erotically as she felt male eyes follow her curvaceous bottom. They reached the gate just as first-class boarding was called.

Jessica and Amber took seats side-by-side near the rear of first class, while Alice looked carefully at her seat number. "Oh, Alice," Jessica said, nonchalantly. "Don't forget your crowning glory-you know what to do!"

Another set of instructions rose within Alice's mind: "You are to use your abilities to arouse and entice your seat mate. You will do everything you can to give him an erection-you may talk sexily, act sexily, you may even fondle yourself and him…but you may not touch his privates, even through clothing. Every minute of his arousal will arouse you as well…but you will only be able to come when he comes!"

Finally, Alice saw her seat--next to a handsome middle-aged man in a well-tailored expensive business suit. Sticking her little finger girlishly in her mouth, she cooed, "Oh, dear, I guess I'll be your traveling companion!" She held out her hand in a limp-wristed gesture. "Hi," she giggled. "I'm Alice!"

Alice snuggled into her seat, wriggling and squirming so that her already short denim skirt rose higher. She watched Larry's eyes focus on her smooth nyloned thighs and glanced over to see a subtle twitch at his crotch. My god! Alex thought. I can't help myself! I'm going to make this guy a sexual wreck by the time we land!

Jessica and Amber watched and laughed quietly as Alice continued her flirtatious seduction of the hapless Larry. "I'm thinking of having my entire body waxed," Alice told him in her breathy voice, "even my crotch!" She saw his eyes widen and his crotch bulge a little more. "Oh, did that shock you?" She moved her hands over her own body, playing with breasts, swishing her ass in the seat. "I just love a nice smooth body, don't you?"

Before the flight was half-over, Larry and Alice were snuggled together, his hands resting on her rounded bottom, hers playing sensuously with his nipples through his shirt…but every attempt to guide her hands to his crotch was fended off. Soon, Alice thought he was on the verge of coming…and knew she was…so she leaned on top of him, rubbed her breasts against his chest and kissed him, thrusting her tongue deep within his mouth. She felt, finally, the power of his orgasm and completion of her own arousal. And then, the final hidden part of Jessica's hypnotic commands took hold. She broke off the kiss, and whispered in his ear, "I'm a guy!"