[Here's another "lost" story, one I remembered from my mispent youth, and then revised it to fit the usual themes of this website.]

It was nearly midnight, and the smoke and alcohol had given Frank a terrific headache. in spite of the pain, he was determined to stay as long as necessary. It had been a long time since he had a girl -- much too long -- and he wasn't going to give up his quest now. He continued to sit at the bar and sip his drink as even more people filled the noisy singles bar.

Frank watched as the virile attractive males moved about the room striking up conversations with the various friendly girls who made the bar so popular. Although he knew he himself was good-looking, he just could not get up the nerve to be in any way aggressive. He envied the boldness of the other males around him, and he watched them from time to time partly in envy and partly in admiration.

Ordering another drink, Frank watched as men and women came in alone, ordered a drink, looked around, smiled at one another,started conversations and flirtations, then left in pairs. There would even be an occasional group departure. It all seemed so easy to Frank. He just wished that a pretty girl would come over to him. One girl did walk by, brushing his arm. Frank smelled a delicate sweet fragrance and was aware of the soft rustle of silken skirts, as the girl barely smiled at him. Frank gulped his drink and offered to buy another for the both of them, but the girl ignored him and continued on her way.

Frank lacked the nerve needed to follow her. Feeling thoroughly dejected, he ordered another drink. Just at that moment three of the most glamorous females Frank had ever seen came into the bar. It was all he could do to keep from gaping open-mouthed at their appearance. The tallest one, who seemed slightly older than the others, carried herself with an air of authority which could only come from the possession of great wealth. Frank noted that the woman wore diamond earrings that glinted brightly in the light from the chandelier at the entry-way. He also saw that her fur coat was almost floor-length, reaching her trim ankles above her shiny patent leather pumps. The aristocratic manner and the expensive attire of the woman set Frank into a nervous tremor.

The woman had an angular, haughty face crowned by an expensive-looking fur hat. Her hands were long and delicate, clearly the recipients of many careful manicures. She carried a long ivory cigarette holder which contained a lavender cigarette with gold designs.

Her two companions were equally glamorous. One, slightly shorter than the others, had the most beautiful brown hair Frank had ever seen. She wore little make-up or jewelry but had on a fantastic suede cape which billowed about her, showing off her slender ankles and delicate high-heeledevening shoes. The other girl, who wore a similar cape, was dressed in a soft white velvet frock that clung to her shapely body in the manner of a Grecian dress. The two girls were quite deferential to their companion as the three of them swept by Frank on their way to the end of the bar.

They stopped where there were several empty stools, but the two younger women made no attempt to sit down. The older woman took regal possession of one stool, and the girl in velvet motioned the bartender to serve them. Frank continued to stare at them as they gracefully sipped their drinks, ignoring everybody else in the room.

In a short while, the brunette caught Frank staring, and he could not help but react with a slight blush. The girl said something to the older woman, who nodded and smiled, then she looked over again and smiled at Frank. He could not believe his eyes. One of these lovely creatures was actually smiling at him!

Frank decided to take the plunge. He summoned all his nerve and walked over to them. "Hi!" he said, smiling at the brunette. "My name's Frank. What's yours?"

"I'm Tonette," she replied, "and this is Jo." She indicated the girl in velvet. Frank smiled and looked at the older woman expectantly. She gave him a deep searching look and smiled very faintly. The brunette spoke again, a formal tinge to her voice. "Mrs. Livanos, I would like you to meet Frank." The woman made no move to offer her hand but stared for a moment at him.

"How do you do, young man? she said finally. "Would you care to join us for a drink?"

Frank accepted the drink and thanked the woman. His mind began to ring with the sound of her name, and he realized finally that it had some connection with an enormously wealthy Greek shipping family. From that moment on, he began to pay more attention to Mrs. Livanos than to the two younger girls. For some reason, they did not seem to mind being slighted.

As it was, Mrs. Livanos appeared to direct the conversation, asking questions about Frank and his background. She listened sympathetically as he told about his childhood. Orphaned at five, he had been reared by fussy unmarried aunts who alternately spoiled him and mistreated him. He told her about his recent discharge from the Marine Corps and his inability to get a job in the city, mentioning that he was living on the last of his savings, alone and without friends or relatives in New York City. Altogether it was the picture of a poor sad young man. A true picture, just slightly colored to get the wealthy woman's sympathy.

More drinks were served, and the little party grew even more friendly. As Mrs. Livanos ordered another round, Frank loosened his tie and began to relax. He was beginning to like this strange exotic woman.

"You seem to have had a tough time of it," Mrs. Livanos purred. She raised her hands and began to stroke his cheeks with the fur cuffs of her coat. "You need soothing, don't you?" Frank could only nod, completely caught up in the unusual attention he was receiving. She continued to play with his face, his ears, his throat with the soft, sensuous fur. Her voice was equally soft and sensuous and Frank soon found himself paying less attention to what she said and more to simply the sound of her voice and the feel of the fur.

At four o'clock the last round was served and paid for by Mrs. Livanos. She turned from the bar and looked at Frank.

"I think we should all go to my place for a nightcap. What do you think, young man?" she inquired, smiling.

"I would enjoy that very much, ma'am," he answered, somewhat dreamily.

The four of them finished their drinks and left. Tonette hired a cab and they all piled in. Mrs. Livanos gave the driver an address on the posh East Side, as Frank lit a cigarette for her, his hands somewhat shaky. He realized he was rather drunk.

Mrs. Livanos lived in an ornate old townhouse in Gothic style on the end of Sutton Place. As he went up the steps in front, Frank began to feel a vague stir of excitement and pleasure. He had a premonition that something quite new and different was about to happen.

They went into a large, gloomy living room, and Mrs. Livanos mixed Frank a drink, taking some time at the lavishly stocked bar. Frank tried to discern the outlines and furnishings of the room as he sipped the drink, but the room seemed to grow dimmer and dimmer as time passed. The girls had disappeared, and the older woman was making small talk as Frank sank deeper into his chair. Finally, an overwhelming fatigue invaded his body and he drifted off into a deep, deep sleep.

"The drug worked quickly this time." Mrs. Livanos' voice came as if from a great distance as the darkness closed in.

When he began to regain consciousness, Frank had no sense of time or place. He only vaguely realized where he had been and with whom. His first clear vision was of a lavishly appointed room. It seemed to be a bedroom. On one side there was an ornate dressing table, its surface covered with jars and bottles and tubes. The walls of the room seemed to be made of mirrors, there were so many of them.

As his reflections became clear in the mirrors, Frank was seized with strange terror. He could see he was on a large bed. The only problem was that his hands and feet were very securely tied. He could see the bonds were mere strips of red satin ribbon, yet strangely he could not break them, no matter how hard he tugged. Otherwise his strength seemed undiminished--it was only these curious bonds he could not break. 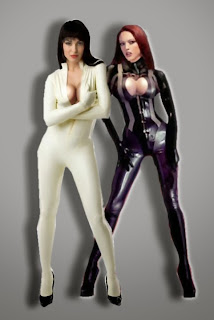 "Hey! What the hell's going on!" he tried to yell, but his voice came rather weak and tremulous. Before he had time to call out again, the door opened. Frank maneuvered himself to his feet in spite of his bonds, as two women came into the room. They were strangely dressed in thigh-length shiny black boots with delicate high heels and close-fitting costumes of black and white latex.

Don't forget to pick the woman you'd prefer to be (details here)!
Posted by Pretty Sissy Dani at 12:00 PM